This post is an update on the Pyjion project to plug the .NET 5 CLR JIT compiler into Python 3.9.

.NET 5 was released on November 10, 2020. It is the cross-platform and open-source replacement of the .NET Core project and the .NET project that ran exclusively on Windows since the late 90’s.

.NET is formed of many components: 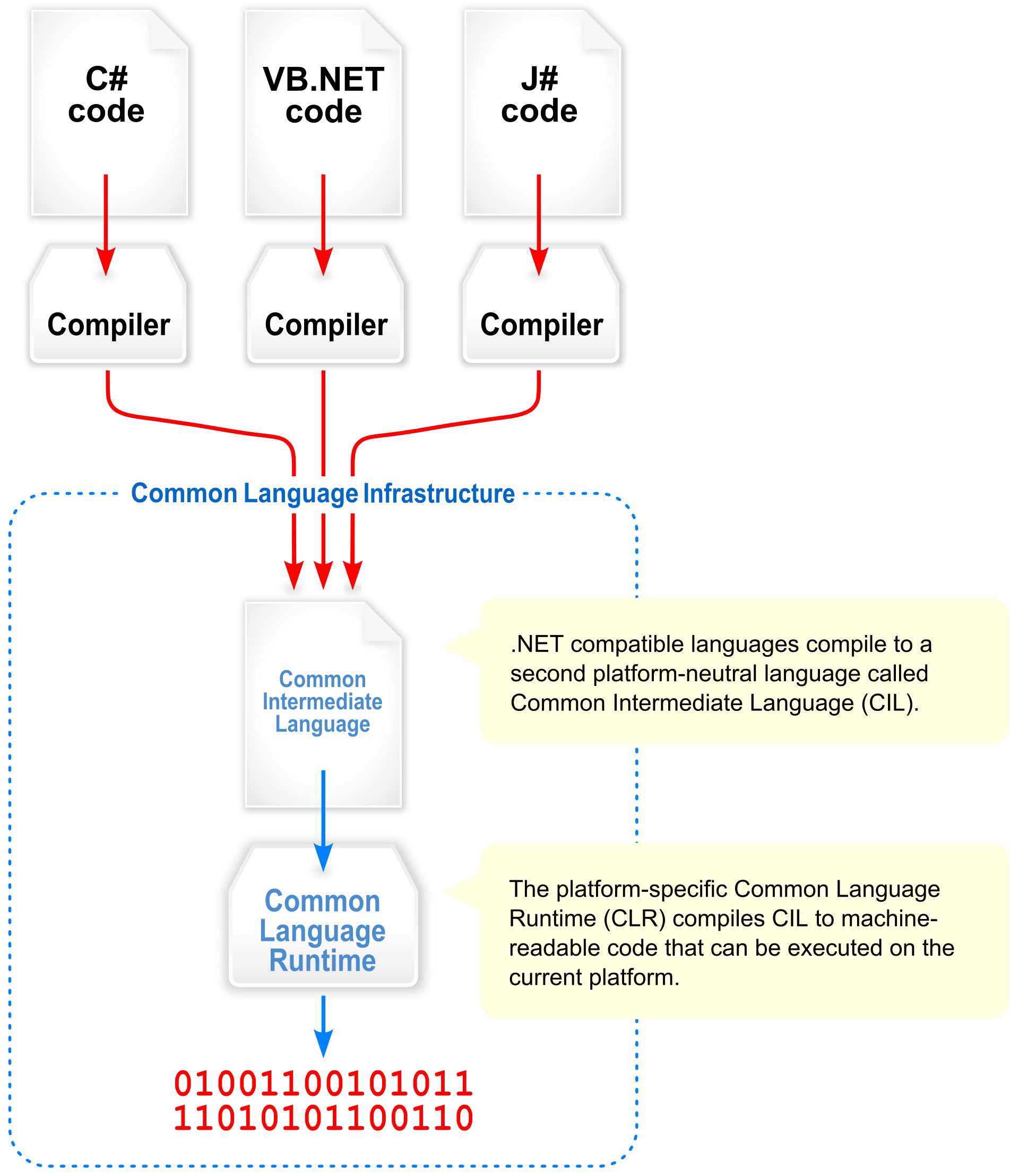 You can write code in a number of languages, like C++, C#, F# and compile those into CIL and then into native machine code (as a binary executable) on macOS, Linux, and Windows. Pretty neat.

But this is a blog about Python. So what does this have to do with Python?

When CPython compiles Python code, it compiles it into an intermediate format, similar to .NET, called Python bytecode. This bytecode is cached on disk so that when you import a module that hasn’t changed, it doesn’t compile it every time. You can see the bytecode by disassembling any Python function:

To execute anything on a CPU, you have to provide the OS with machine-code instructions. This can be accomplished by compiling them up-front using a compiled like the C or C++ compilers. They compile code into executable formats as either shared libraries or standalone executables. See my post on Python/assembly for a bit more info on this topic.

CPython converts the bytecode into machine code instructions like looping over them in a precompiled function, called the evaluation loop. This is essentially a big for loop with a switch statement. The compiled version of CPython that you’re running already has the instructions required. This is why CPython’s evaluation loop is an “AOT”, or “Ahead of Time” compiled library: 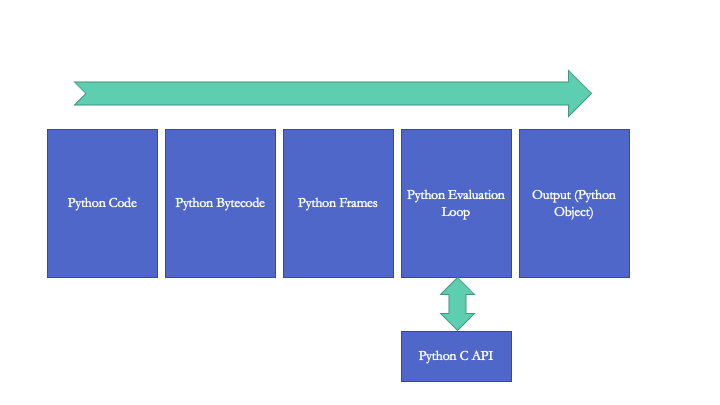 Note: There is a lot more to CPython’s compiler. I’ve written a whole book on the CPython compiler and the internals of CPython if you want to learn more.

There are a few issues with this approach. The biggest is speed. A series of inline machine-code instructions is very performant. CPython has to make judgements at runtime for which code branch to follow every time your function is run. This leads to CPython being 100x slower in “tight-loop” problems where its executing the same thing again and again. The machine-code is compiled ahead of time and it has to loop around to get to the right instructions. Checkout my PyCon talk for a more in-depth explanation:

The most common way around this performance barrier is to compile Python extensions from C. This produces a custom binary with inline machine-code instructions for the task at hand. This is how most machine-learning and data science libraries like numpy, pandas, SKL are put together. This approach is still AOT compiling the code. It also requires a lot of knowledge of C. This approach has worked really well for the data science community, where algorithms can be performant and leverage low-level platforms like GPUs or specialised AI chipsets.

There are a few issues with the AOT extension module approach. One is that it still uses the evaluation loop. C extension modules are a set of functions. Once you call the C-compiled function, its in the performant code, but your Python code that’s calling it still lives inside Python’s loop. If you want to leverage a compiled library and your Python code is doing some heavy number crunching, you end up having to use an API of functions, like numpy, instead of a more fluent Python API:

What Pyjion does to solve this issue

A few releases of Python ago (CPython specifically, the most commonly used version of Python) in 3.7 a new API was added to be able to swap out “frame execution” with a replacement implementation. This is otherwise known as PEP 523. PEP 523 also added the capability to store additional attributes in code objects (compiled Python code. 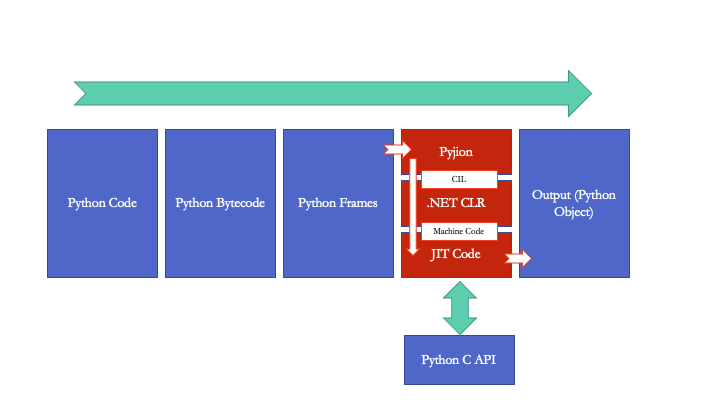 CPython compiles the Python code, so whatever language features and behaviours there are in CPython 3.9, like the walrus operator, the dictionary union operator, will all work exactly the same with this extension enabled. This also means that this extension uses the same standard library as Python 3.9.

Pyjion is a “pip installable” package for standard CPython that JIT compiles all Python code at runtime using the .NET 5 JIT compiler. You can use off-the-shelf CPython 3.9 on macOS, Linux or Windows. After installing this package you just import the module and enable the JIT.

Once a frame has been compiled, the binary code is cached in memory and reused every time the function is called: 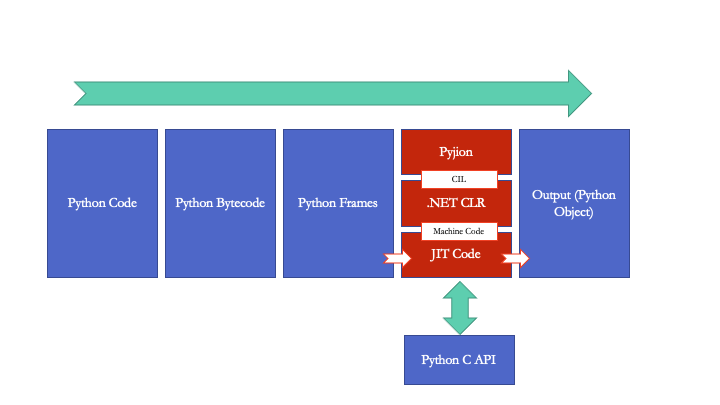 To get started, you need to have .NET 5 installed, with Python 3.9 and the Pyjion package (I also recommend using a virtual environment).

After importing pyjion, enable it by calling pyjion.enable() which sets a compilation threshold to 0 (the code only needs to be run once to be compiled by the JIT):

Any Python code you define or import after enabling pyjion will be JIT compiled. You don’t need to execute functions in any special API, its completely transparent:

You can see the machine code for the compiled function by disassembling it in the Python REPL. Pyjion has essentially compiled your small Python function into a small, standalone application. Install distorm3 first to disassemble x86-64 assembly and run pyjion.dis.dis_native(f):

The complex logic of converting a portable instruction set into low-level machine instructions is done by .NET’s CLR JIT compiler.

All Python code executed after the JIT is enabled will be compiled into native machine code at runtime and cached on disk. For example, to enable the JIT on a simple app.py for a Flask web app:

Will this be compatible with my existing Python code? What about C Extensions?

The short answer is- if your existing Python code runs on CPython 3.9 – yes it will be compatible. To make sure, Pyjion has been tested against the full CPython “test suite” on all platforms. In fact, it was the first JIT ever to pass the test suite.

Thats because this isn’t a Python runtime, it uses the existing Python compiler to compile your code into Python bytecode (low level instructions).

Pyjion uses the same dynamic module loader as CPython, so if you import a Python extension from your virtual environment, it will work just the same in Pyjion.

Pyjion isn’t new. Brett Cannon and Dino Viehland started the Pyjion project 4 years ago. This was the first JIT to pass the full CPython test suite. There were some limitations to the original proof-of-concept:

Has much changed since Python 3.6? To the average user, not really. But under the hood, the implementation of a few things has completely changed:

Actually, a lot has changed in the last few releases of CPython. The new fork to get Pyjion working with the latest version of everything was a big undertaking…

The goal with the latest patch was to get the project up to the condition of:

The short answer a little, but not by much (yet).

JIT compiling something doesn’t make it faster. Actually, the overhead of compiling functions the first time they are called often makes it slower.

JIT compilers are faster because of optimizations at runtime. A good JIT compiler will make assertions about the function that its compiling and how it behaves to optimize out code paths, shortcut calls and inline instructions. This can make drastic differences.

However, Pyjion doesn’t do that. Yet. The goal with this patch was to build a solid foundation on which optimizations could be written and tested.

The .NET JIT does have some optimizations for CIL->machine-code, but it has absolutely no knowledge of Python, types or structure. This needs to be written in Pyjion.

I think these optimizations will be game-changing in terms of performance gains for Python.

Here are some basic ideas I’ve been thinking about and it would be great to test:

Does this help me use my .NET libraries from Python?

Short answer is no.

Long answer is that CIL has two types of instructions, primitive and object-model. The CIL specification has an entire standard for object declaration, types, equivalence etc. Pyjion converts Python bytecode into primitive CIL instructions. Python bytecode itself is mostly primitive. There are some exceptions, like specialised bytecodes for declaring lists, dictionaries and tuples. But most of the work to convert classes, functions and fields into primitive types happens further up the chain. Therefore it would be a huge undertaking to implement object-model interfaces for Python.

If you want to do this, I recommend checking out Python.NET.

Comparison with other projects

There are some potential benefits to this project:

Awesome, how do I install it?

Checkout github.com/tonybaloney/pyjion. For now, compile from source. I am also publishing from precompiled wheels onto PyPi.

It is very-much alpha. Don’t deploy to production*