In this article, I’m going to cover various exploits that can work against the Django templating engine in a modern web application.

I’ll show how and why they work, as exploits, the risks of leaving them unfixed. Then, I’ll show you how to find them using a fuzzer I’ve been developing.

A quick introduction to Cross-Site-Scripting

Cross-Site-Scripting, or XSS, is the technique of exploiting web applications to cause trick users’ browsers to executing arbitrary (and malicious) JavaScript.

The malicious JavaScript code would be targeted to accomplish something like:

This exploit works based on the assumption that the HTML and JavaScript served from a website’s server is “trusted”.

If you visit your favourite website, you’d expect that the HTML and JavaScript served to you and rendered in your browser is “safe”. Because of the mix between User-Generated-Content (UGC) and static content in most modern applications,

Some common examples of content which is rendered as part of the site DOM from a database would be:

Instead of putting in their name as “Jim Smith”

This is fine if user = "Jim Smith", but if Jim is a bit more callous, then he could enter his name as <img src="https://media.giphy.com/media/I3eVhMpz8hns4/giphy.gif"/>.

Anyone viewing this page would then see the GIF that Jim injected into his username:

This is an example of Stored/Permanent XSS. There are 2 groups of XSS exploits, which we’ll explore:

Reflected XSS is common in both server-side and client-side applications. A common XSS flaw in applications that attackers will seek out is a search page. Take this (very) simple example of a HTML + JavaScript page for showing a form asking for a search query and showing what the user searched for if the GET parameters is existent.

Your regular user would search a text string which is shown on the page:

An attacker could search for any valid HTML and it would become part of the DOM:

In the reflective XSS model, the malicious payload is sent back to the attacker. This type of attack is less-dangerous than permanent XSS. 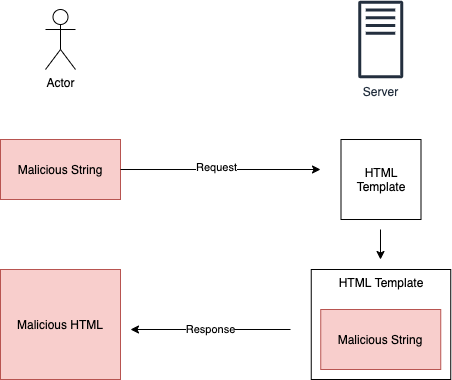 Reflective XSS attacks are used by attackers sending a link and tricking a user to show the reflected payload to accomplish the hack.

Permanent XSS attacks are far more dangerous to an application because the attack has the opporunity to impact all of the users of the site, including the site administrators.

The attack mechanism is the same as reflective, but the server-side application stores the malicious payload in a database, or a file of some sort: 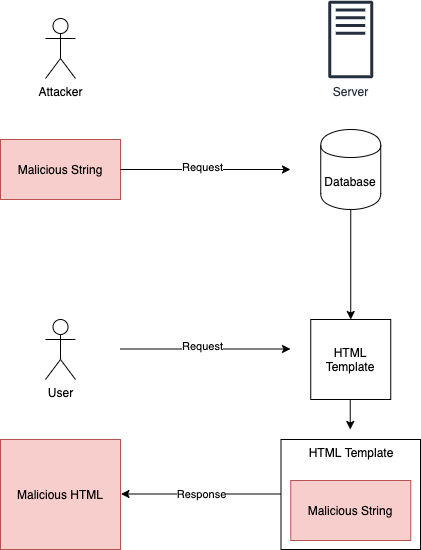 Some really-basic examples I shared were user names, comments, and profile photos.

Django assumes that all context data is “unsafe” unless otherwise specified.

This means that most forms of XSS attack don’t work with Django templates.

For example, if you wrote the following template:

Django would automatically escape the malicious string in the query context variable:

It does this by passing all string data through Python’s html.escape() function. This function will:

To say that this escaping of these 5 characters “protects” your application is a gross-underestimation of XSS.

There are many caveats to Django XSS protection, and as you learn more about XSS you’ll be able to spot them in your templates.

1. It only applies to the Django template engine

The XSS protection for Django is part of the Django templating engine. If your application heavily uses a client-side JavaScript frame (such as Angular, Vue, React) then the Django XSS protection is not helping you.

Furthermore, many Django extensions that rely on combined JavaScript/Python logic have XSS flaws. These include many form extensions like Date/Time selectors. Some of these flaws have been discovered and fixed, but many go unnoticed.

2. It does not protect against the misuse of “Safe Strings”

The Django XSS protection can be disabled when a string is marked as “safe”, either in the View logic by using the mark_safe() function, or in the template using the safe filter.

Alternatively, in the template you can use the safe filter to disable the HTML escape protection:

This may seem obvious that by explicitly disabling XSS protection that it doesn’t protect you against XSS, but “Use mark_safe()“ is an accepted solution to a worrying number of Django questions on StackOverflow.com.

Here is an example of a filter tag that I wrote to convert using Bleach to remove any potentially harmful data:

You’d use this tag as a drop-in replacement for safe:

3. Some types of attribute escape are not protected

Many XSS techniques use HTML/JavaScript event handlers as attributes of existing tags instead of new <script> tags.

For example, many HTML elements support an onload event. The HTML can have any JavaScript action as a trigger and it doesn’t require any user interaction:

If your Django template had the src attribute replaced with a context variable:

The attacker would set their profile photo URL to "/img/home-bg.jpg onload=alert(1)" to accomplish this attack. Because you didn’t encapsulate the src attribute in quotes, the Django XSS protection won’t escape the input.

4. It does not protect against other attributes which accept JavaScript

Let’s say you let your users add a link to their personal website that shows up on their profile page inside your application.

What could go wrong?

Well, the attacker can just put "javascript:do_stuff(xxvb)" as the link to their website, so if the user clicks on the link, it executes whatever JavaScript the attacker wishes.

You could check for user.profile_url.startswith("javascript:"), however the following are also valid in most browsers:

The escape function that Django XSS protection uses will escape the string quotes ' and ".

This is valid ES6:

6. It does not protect against the data protocol base64 encoded strings

You can encode any HTML string to get around the escape() filter used base 64. If you mark the URL using the data protocol and base64 encoding, the browser will decode the string and load the HTML.

<script>alert('hi');</script> in base 64 is PHNjcmlwdD5hbGVydCgnaGknKTs8L3NjcmlwdD4= to the data protocol string is:

This doesn’t contain any of the “unsafe” entities that html.escape() looks for.

7. It does not protect against unquoted JavaScript injections

Let’s say that you have a Spinner widget that lets the user select their price range for buying a car.

They can enter their price range as $5000 - $10000 dollars and you set the minimum and maximum values for this widget inside your template.
Because they are JavaScript integers, you don’t use quotes:

In this example, minimum_price can be 0 ; malicious_code() and it will inject the JS directly into the rendered page. Again, the XSS protection in Django will not protect you here, because it doesn’t contain any quotes or HTML entities.

Because there are so many potential caveats to Django XSS protection, I decided to write a testing utility for detecting possible vulnerabilities in templates.

The way it works is as a piece of Django Middleware that you use whilst testing which replaces any string-like value in the context data with a malicous string.

So far, I’ve added the following test strings. Each one will try and call console.log('--SUCCESS[field]--') to write to the JavaScript console log to prove the flaw.

The middleware is very aggressive, so don’t deploy this anywhere other than a testing environment!

To install via pip

Add ViewFuzzerMiddleware to your middleware list for a test environment.

Once you’ve restarted Django, it will replace anything “string-like” in the context data with a malicious string. By default it will try <script>throw onerror=eval,\'=console.log\x28\\\'{0}\\\'\x29\'</script>. 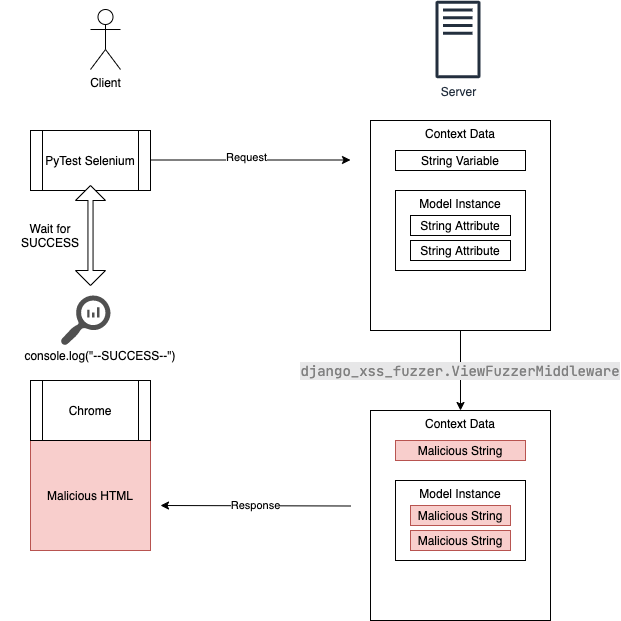 When you browse any of the pages on your site, you should see Django successfully protecting and escaping the strings. 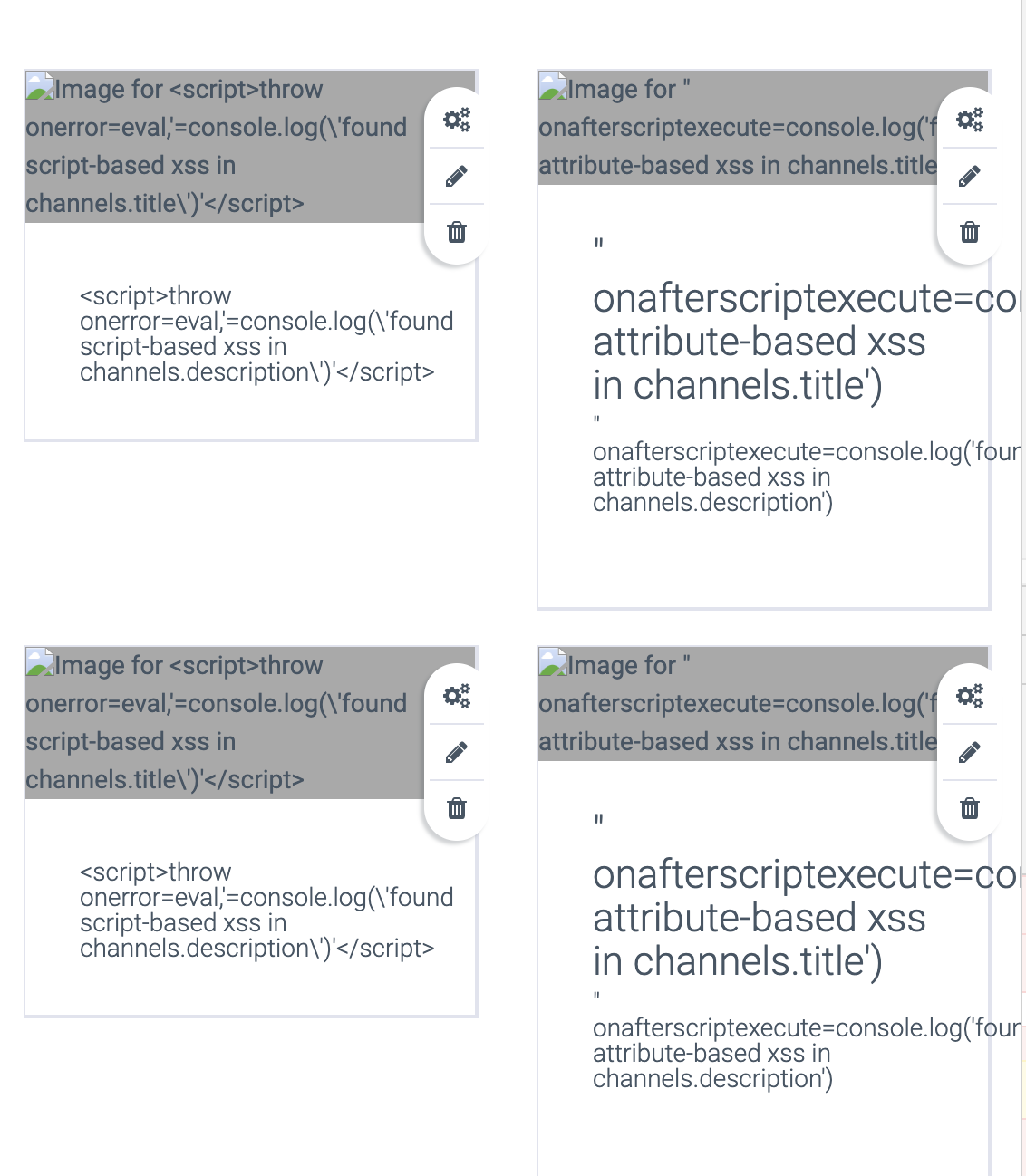 When you open the JavaScript console, if you see any --SUCCESS[]-- messages this means your page is vulnerable, the name of the field that it replaced will be inside square brackets.

To change the malicious string, set the XSS_PATTERN variable in your Django settings.

It’s designed to be paired with PyTest, PyTest-Django, and Selenium so that it will try a range of malicious strings until it finds a successful attack vector.

The selenium integration is required so that each view will be rendered and then processed by Chrome. Once Chrome has loaded the page, the tool will inspect the JavaScript log for any occurences of --SUCCESS[field]-- and then fail the test if one is found.

Here is an example test for the URLs / and /home:

The test function test_xss_patterns is a parametrized test that will run a live server using pytest-django and open a browser for each test using pytest-selenium. To test more views, just add the URIs to paths.

To setup selenium, add the following to your conftest.py:

This will configure Chrome as headless and enable logging to capture the XSS flaws.

To run PyTest with this plugin, use the --driver flag as Chrome and --driver-path to point to a downloaded version of the Chrome Driver for the version of Chrome you have installed.

Once this is running, you’ll see something similar to the following output:

For each failed test, inspect that particular view with the attack string and see where the potential vulnerability is.