In this tutorial, I’ll talk about the PyPy interpreter and how you can deploy a FastAPI Python application into production swapping out PyPy for CPython as the Python interpreter.

All of the code for this tutorial is on GitHub.

Why use PyPy over CPython?

You’d consider choosing PyPy over CPython because for many workloads it is faster. Much faster.

The speed difference depends greatly on the type of task being performed. The average of all benchmarks is 4.5 times faster than CPython.

Some things that PyPy is great at:

On the flip side, it’s not so great at:

Benchmark your application and see if it makes sense. In many production environments, CPython is not the bottleneck. The bottlenecks are external services like databases, network latency, storage and logging.

First, you’ll need a copy of PyPy. My strong recommendation is to use a Docker image, such as the official pypy:3.9-slim-buster image.

If you want to install locally outside of Docker, you can use one of the downloadable binaries.

Once PyPy is installed, or if you’re inside a Docker image, you follow the same workflow as with CPython.

Next, setup your editor to use this virtual environment. I’m using VS Code, so I select the interpreter by using the Python: Select Interpreter command in the command pallette:

Next, setup a Docker image so the app is testable locally and runnable in the cloud.

Setting up a Docker image

To keep the installation of PyPy simple both in the production environment and in development, we’ll use Docker from now on.

The Docker image I’m using is the 3.9-slim-buster image from the pypy org on Docker hub. There are slim-bullseye, bullseye and buster images too in the tags.

My Dockerfile is a copy+paste of my usual Python dockerfiles. The only thing I’m changing is to run pypy instead of python to execute both the pip installation and to run the web application.

My demo application is normally run with python -m uvicorn api.main:app, so the equivalent Dockerfile is:

If you want to develop inside this Docker image, you can create a dev container. I’ve written a todo on how to configure this over at RealPython.com.

Azure’s PaaS options for Python like Azure Functions and Azure Web Apps are built on CPython. PyPy is not an option out-of-the-box. However you can deploy custom Docker images both to Azure Web Apps and to the shiny-new Azure Container Instances (ACI) platform.

I’m going to use ACI because it’s the simplest way to throw a container at the cloud and watch it fly. I’ll assume you have the Azure CLI installed and that you have an Azure Subscription.

There are 3 components required to run this app:

Also, you’ll need somewhere to put the Docker images. I’ll show you how to deploy with an Azure Container Registry. You can instead use Docker hub or any other hosting platform.

First, setup some variables in Bash

Sign in to the container registry with those credentials. Build and upload the Docker image:

Create an Azure Container Instance and deploy from the Docker image:

Optionally you can add a CNAME record to an Azure DNS managed zone.

If you want to automate those steps by setting up a CI/CD workflow, checkout the official docs with a Github actions example.

So, is it faster?

To test this, we can run a simple benchmark. Using [Apache Bench] we can make 10 requests to the /locations endpoint. I’ve seeded the database with 10,000 records and used the in-process SQLite API with aiosqlite, an async API. The data-reflection is being done using Tortoise ORM, an ORM written in Python.

This is an exaggerated API call as it’s handling a lot of data. I’ve done this so it’ll be clearer whether it made a difference. So first, lets try PyPy 3.9

Next, change the Dockerfile to use the python:3.9-slim-buster image and use python instead of pypy to run all the commands. Deploy the image again and I ran the same benchmark against the CPython version:

So, the results are that the response times are 3-4x faster from the 50th to the 90th percentiles! 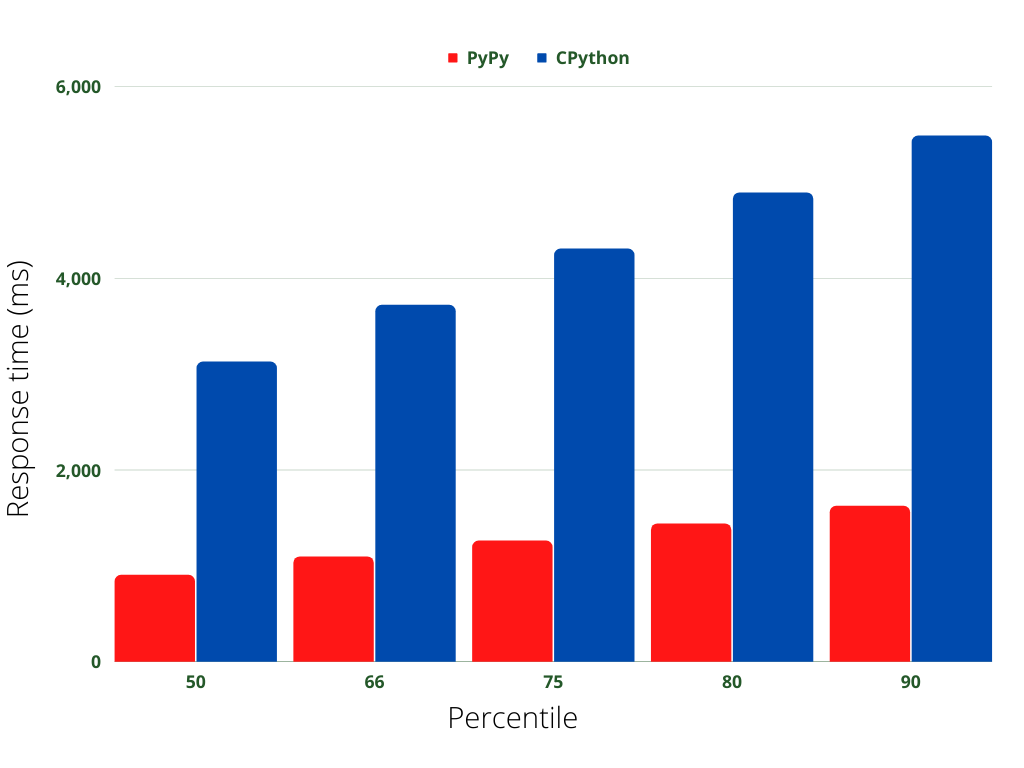 But, is it really that simple? After posting this on Twitter, I got a number of requests for more data. The example above benefits from PyPy’s optimizations because it is a slow API call which needs to query, process and serialize 10,000 records. What about memory?

I spawned the container again and ran a small bash script in another terminal to poll the memory usage of the container:

When graphed it showed that the baseline memory usage of the web app is higher in PyPy.

However, we’re talking about 45 vs 95 MiB of RAM, which is miniscule. The memory usage of PyPy doesn’t ramp up with the requests so it appears to be pre-allocated against the process. It would make sense to run a continued benchmark against different API calls using a suite like locust, as I’ve shown in another blog post.

The first benchmark was against a response for a very-slow API function. What about a faster one?

Since Uvicorn should be able to handle a bit more of a hammer, I’ve kicked up the concurrency to 100 and the requests to 10,000. The results are totally different to the first benchmark.

I’ve also added (thanks to a Twitter comment) uvloop to the Uvicorn configuration to improve the CPython benchmark. I wasn’t able to install uvloop with PyPy, so I’m showing it with and without for fairness. 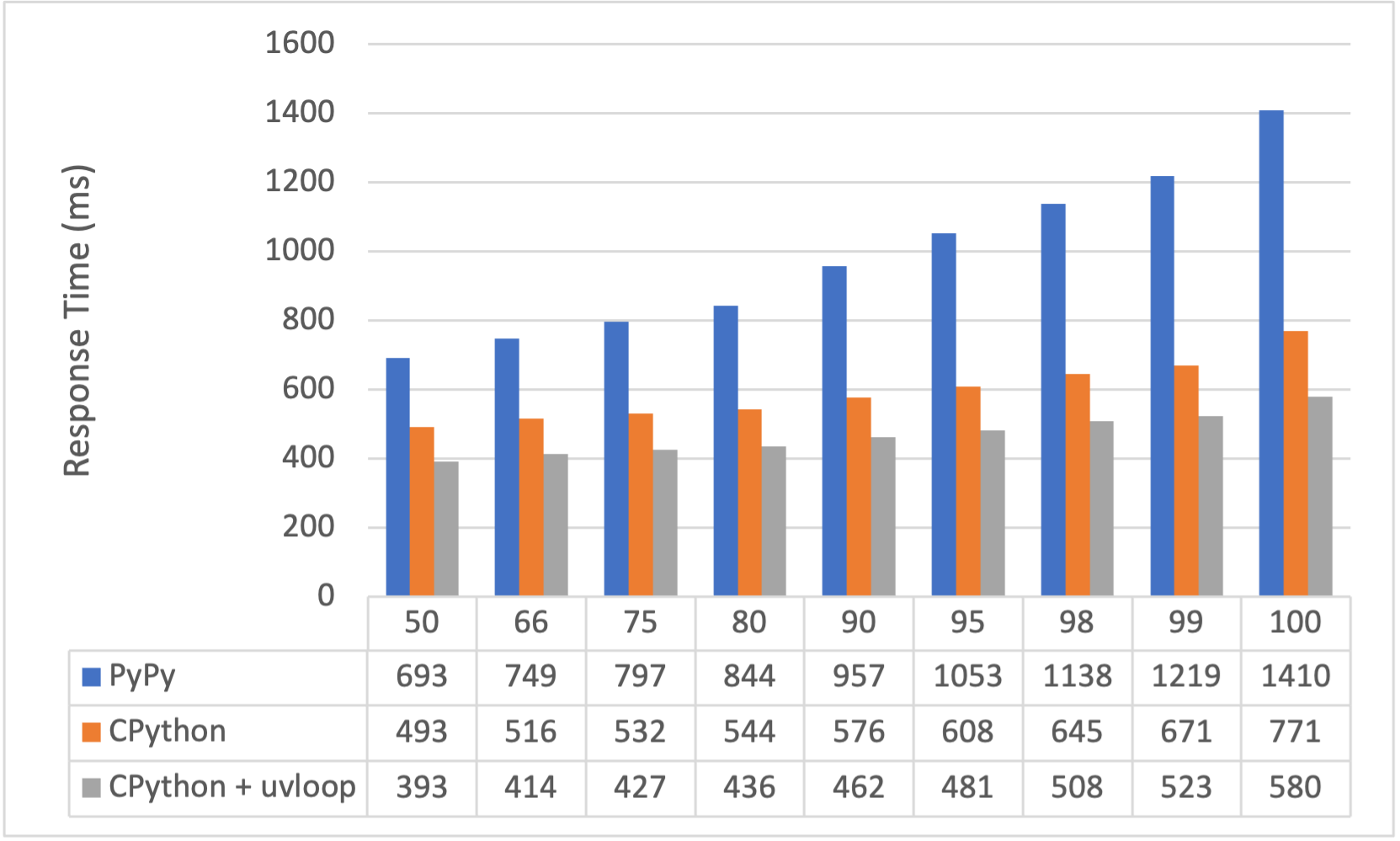 My assumption for the poor performance is that PyPy doesn’t have much opportunity to optimize the core HTTP process, the FastAPI pipeline and the API route. Compared with the “slow” call, which does a lot more pure Python, with lots of loops, dictionaries and class instantiation.

In conclusion. Swapping CPython for PyPy could be a simple way to get instant performance gains on your Python application. Or it might not. Either way, it’s simple to try it out and benchmark.

I recommend writing a full benchmark suite on Locust to decide for yourself.